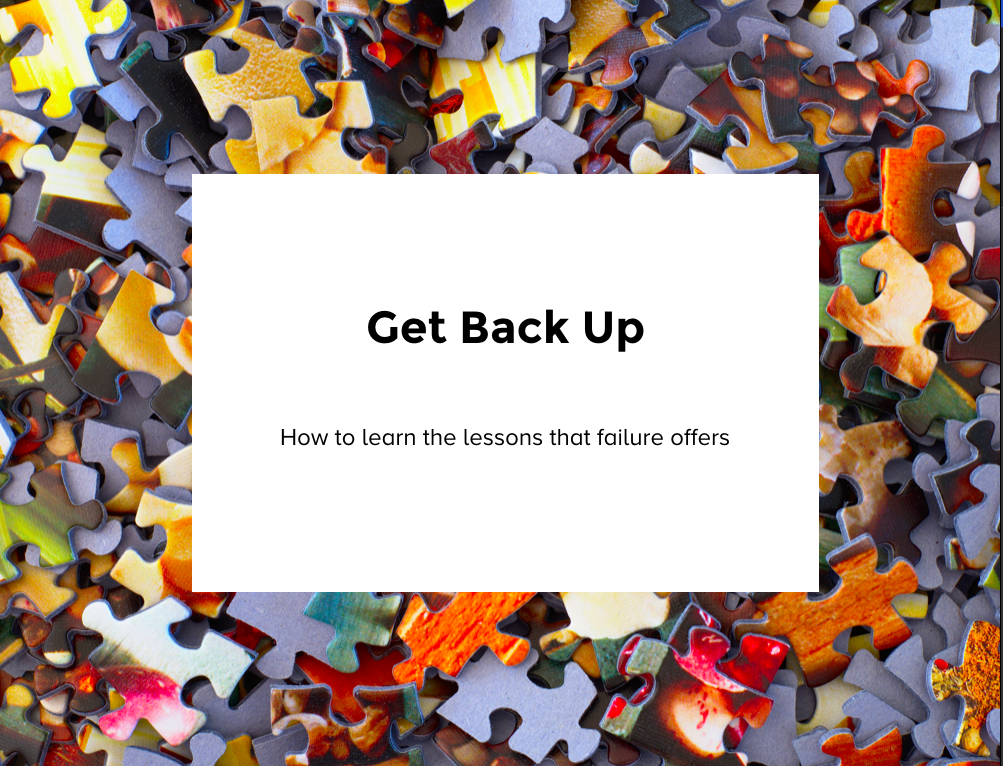 I was on a coaching call with a client and at the end of the call she opened up to me about her fourteen year old son and how he is struggling in math despite taking the time to study. “His confidence in his skills is suffering because he says it doesn’t matter how much he studies, his test marks never reflect his efforts.” I asked her to pay attention to how he studies next time he has a test or a quiz and let me know. A couple of weeks later she reported back. Her son reads his math teacher’s notes until he has memorized the steps. For someone who is an experienced learner, it’s obvious that studying math by reading and memorizing notes is a waste of time. You study by answering questions and solving problems. But if kids haven’t been shown how to study, how would they know?  In the absence of a proper strategy, they think whatever they’re doing is productive studying.

Telling people to ‘learn from failures’ without giving them the steps is like telling school kids they should ‘study for tests’ without telling them how.

By the same token, there are countless books, articles, videos, workshops, retreats, etc. that tell people how vital it is to success to “learn from failures” without providing an actual strategy. So how should you learn from your failures?

Reflect and ask for feedback

Before you can learn from failures you need to think back and understand exactly what went wrong. Whether you didn’t get the job you interviewed for or the promotion you anticipated, or didn’t sell as many tickets as you hoped for, the first thing is to gather information about the events that transpired. If it’s not clear to you, and a lot of times it won’t be, ask for feedback. If you are rejected after a job interview, for example, contact the employer, thank them for following up to tell you about their decision, let them know you are always trying to improve yourself and ask them for feedback on why they decided not to hire you. The goal is to understand how you can improve and make your application stronger for your future interviews. Many times when people make mistakes they move on without looking back to dissect the process to see which step didn’t work. You can’t fix something unless you understand how it’s failing, so it’s worth the time and effort to see what the problem is.

My background and training is in science and I spent five years working in labs doing experiments. What many scientists learn in their career is that only a small percentage of experiments actually work. Most fail for one reason or another. But often we don’t know why or which step didn’t work and that’s why we are trained to trace back to see if we did everything the way we should have and try to pinpoint what went wrong.

Tweak and work on the failed steps

It’s cheaper and more efficient to narrow in on the issue instead of trying to work on the entire process as a whole. If your kitchen sink gets clogged you wouldn’t replace all the piping. You would try to see where the blockage is and remove the gunk from that specific location. Similarly, treat your failures as case studies. Go in depth to find the problem by breaking down the events and situations into components and steps to narrow in on the main issues. Then try to lay out the solution to work on those specific issues.

Once you’ve learned from your failures it’s time to go back out there and try again. Execute what you’ve learned and implement the new strategies and habits you’ve been working on. Keep your eye on the results you get this time around so you can receive more feedback and continue your improvement.