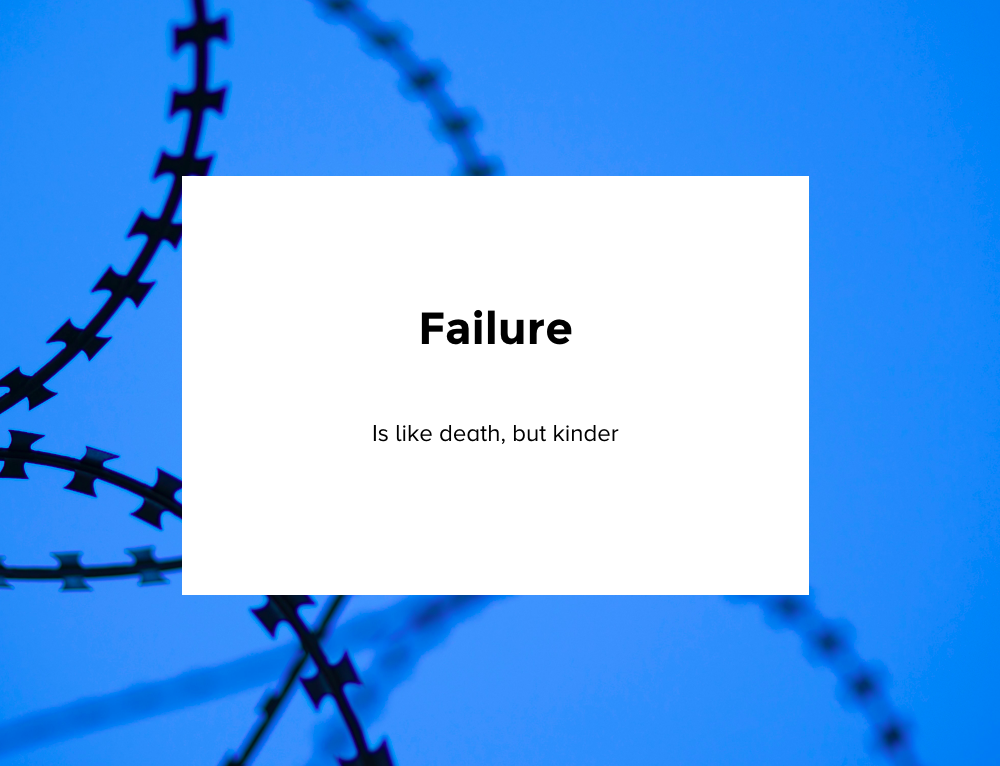 Everyone hates to fail but for some people that fear is so strong that it runs their life and their inability to overcome it gets them stuck in perpetual mediocrity. They have had so little practice falling and getting back up again that they use every excuse to avoid potentially difficult situations. And when they do end up failing, they refuse to see their own part in the events that led to the outcome. It’s always someone else’s fault or shortcoming. In the last ten years of my work with students I have met kids who refused to take responsibility for their poor academic performance. They are too quick to point the finger at their teacher, the difficulty of the subject, or their lack of interest. The reason is almost never their lack of effort or work ethics.

People who have a debilitating fear of failure don’t view failure as an event, but see it as part of their identity. When they experience failing, they don’t tell themselves “I failed”, instead they say “I am a failure,” which creates deep shame. So the inability of these people to accept responsibility for their failure is their desperate attempt in deflecting the event from their ego, identity, and self-esteem.

The truth is that most successful people face and overcome great failures, disappointments, and adversity to get where they are. One of my friends who went to university with me is now a doctor but the road to getting accepted into medical school was a challenging one for him despite his phenomenal GPA and impressive list of leadership and extracurricular activities. The process took three years and he was rejected twice, but with each rejection he took the time to ask for feedback, reflect on his weaknesses, and create an action plan to improve his application for next year.

Failure is a powerful learning tool if one knows how to use it to their advantage because it is the most honest feedback one can receive about their effort, habits, and strategy. Sticking with it, perseverance, and resilience all require belief in ourselves and our ability to learn and grow from our failures. Failing forward is the fuel to achieving success because as long as we are learning from our mistakes and failures, we are actually moving closer to achieving our goals.

Dr. Carol Dweck is a psychologist and a Stanford University professor who is known for her work on the mindset psychological trait. According to her there are two mindsets in learning – we either learn with a growth mindset or a fixed mindset. Fixed mindset learners dread failure because they see it as a negative statement on their abilities, while growth mindset individuals don’t mind or fear failure as much because they realize they can learn and improve their performance.

Do you have a growth or a fixed mindset?

Fixed mindset and growth mindset individuals approach learning differently. Their beliefs about intelligence and talent leads them to behave a certain way to challenges and obstacles. Fixed mindset individuals, for example, believe that you were born with certain talents and intelligence and there is really nothing you can do to change. Their belief leads them to not put any effort or work into improving themselves because in their view, there is no point. This leads them to avoid difficulties that could ‘expose’ them as not being smart or talented. 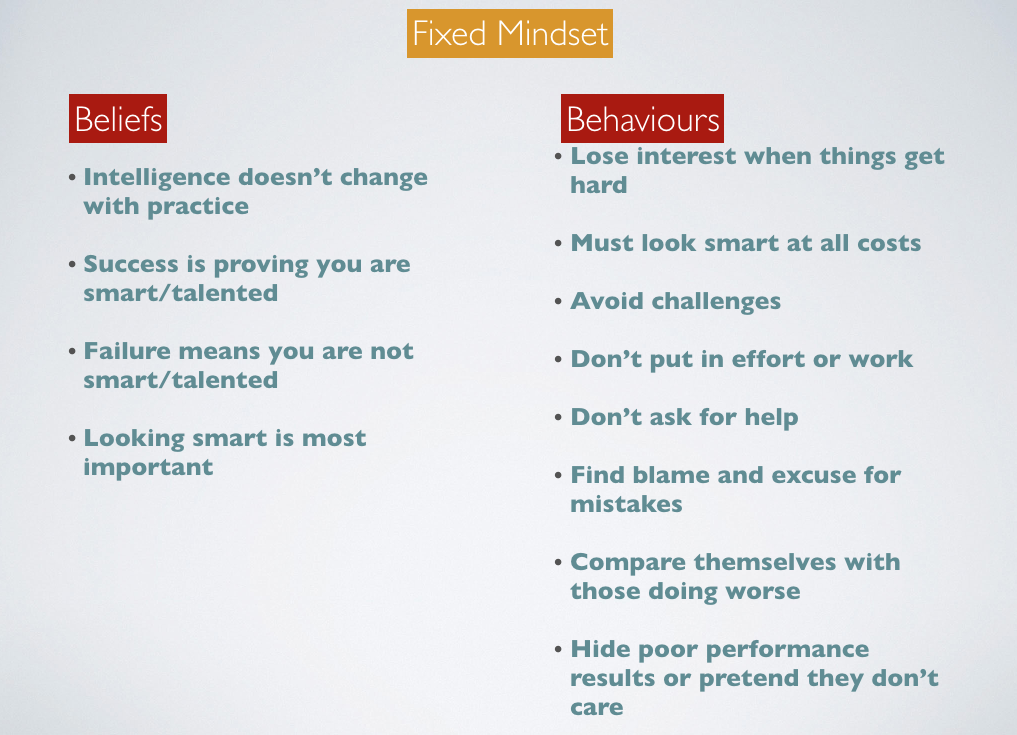 Growth mindset individuals believe that talent and intelligence improves through learning – that through putting in effort and work, you can become more talented or smarter. For this reason, they do not view failure as fatal, they see it as a learning opportunity to make them better. And since they have no image to uphold, they seek out and learn from those who are more talented than they are to help them boost their progress. 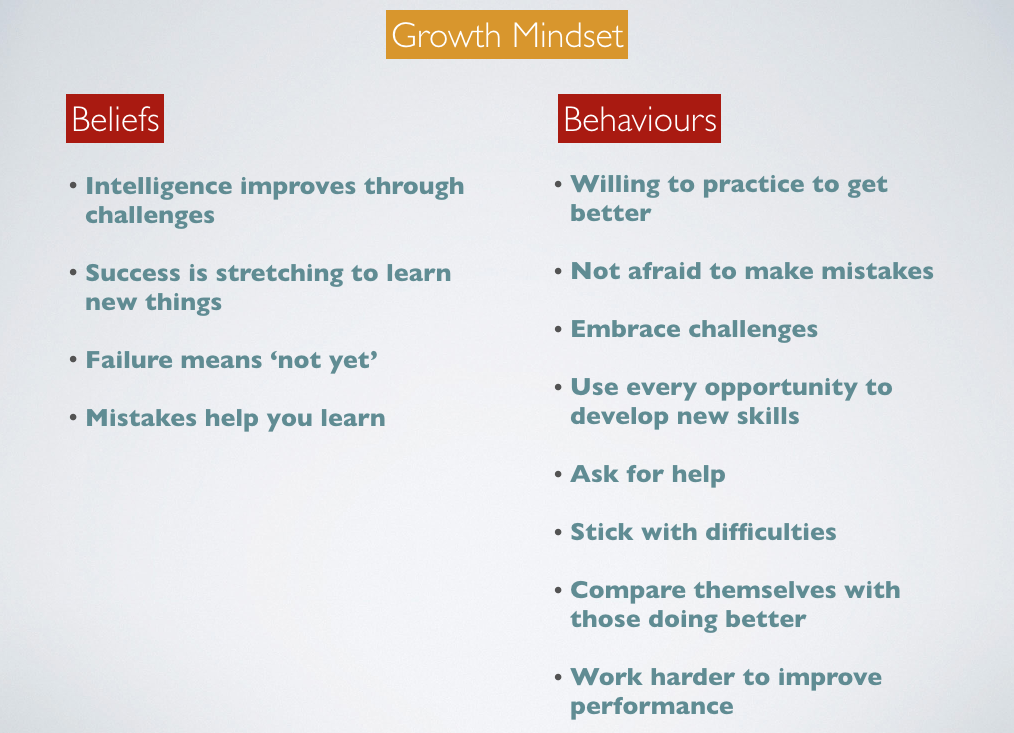 How can you shift to a growth mindset?

The good news is you can move between each mindset. If you suspect you have a fixed mindset next time you make a mistake or fail at something, instead of hiding it or brushing it aside, reflect on it and ask yourself the following questions:

Face your failures instead of running away from them. Get the help you need until you gain confidence in your ability to learn from your mistakes and failures. Through years of working with students I’ve noticed that once a struggling student gets a taste of success on a quiz or a test they shift their thinking. They realize that hard work and effort really does pay and that they are capable of learning and improving. This boost in their confidence encourages them to try harder questions and start enjoying the learning process.

Same as with students, once you overcome a failure through your efforts and hard work it will change your mindset about how you view failing. Instead of them being terrifying events to avoid, you embrace them for the learning opportunities they provide.